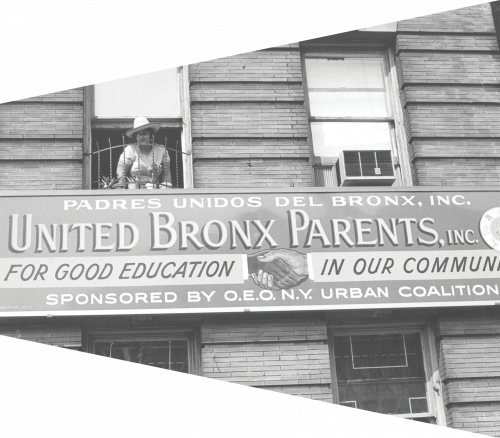 Join CENTRO, Hunter College, Hostos Community College, and the Evelina Centennial Committee on September 15th, 2022 at 3 PM EST at the Silberman School of Social Work to celebrate the life, legacy, and immensely impactful work done by The Hell Lady of the Bronx, Evelina Antonetty.

Learn about the beautiful and powerful activist work done by Evelina during a panel presentation introduced by CENTRO Directora, Dr. Yarimar Bonilla, and hosted by the Mistress of Ceremonies Malin Falu. Panelists include Dr. Laura Kaplan, Dr. Nydia R. Edgecombe, Dr. Ana Celia Zentella, Hildamar Ortíz, Democracy Now! Journalist Juan González, and Dr. Víctor Vázquez-Hernández as a moderators, with a special reading of an essay by Dr. Lana Dee Povitz. Following the panel will be the Images of Evelina exhibition featuring art reproductions from Maestro Antonio Martorell, Nitza Tufiño, and María Domínguez, among others, and a poetry reading by Maria Aponte. Also on display is The Hell Lady of the Bronx exhibition in the Library and Archives reading room consisting of archival documents and other primary resources from the CENTRO archives. This exhibition will provide further context for Evelina’s work and how she improved the lives of the youth in the South Bronx through food activism and advocating for improved education.

This celebration focuses on Evelina’s commitment to improving the quality of life for Puerto Rican children of the South Bronx. Her work resulted in bilingual education accessible in the South Bronx through United Bronx Parents, food activism and free lunch programs in school, and empowering members of the community to get involved in their children’s education. Evelina loved her community, and her work meant a difference to many children and their families. It often resulted in steady meals in the Summer when school was no longer in session and better quality schools for these children.  She understood that her community in the South Bronx, and the Puerto Ricans living in it, were being destroyed and forgotten. In her own words “We will never stop struggling here in the Bronx, even though they’ve destroyed it around us… We would rather pitch tents if we have to rather than move from here… They will never take us away from here.”

At UPR, she obtained a Sociology B.A. At Birkbeck College in London, she studied acting (1973); completed an Allen and Singer School Broadcasting certificate (Trenton, New Jersey, 1977); and earned a Media Studies M.A. at the New School for Social Research (New York City, 1983).

El Nuevo Día selected her as “Woman of the Year” (1973), the Puerto Rico National Day Parade Committee bestowed “Madrina” (1982), and she won fifteen ACE Awards between 1981 and 1997. Kean University conferred an honorary doctorate on her in 2004. A breast cancer survivor (1999) and an outspoken critic of media gender and racial biases, Falú briefly married Afro-Puerto Rican NYU professor Carlos de Jesus in 1975. Since January 2019, Manhattan Neighborhood Network has televised her Palique con Malín Falú.

Dr. Víctor Vazquez-Hernández (Hostos Community College/A.A., Inter American U/PR/ B.A., U of PR/M.A., Temple U/PhD) taught at Temple University and Miami Dade College for 35 years. He was also Chairman of the Social Sciences Department and Interim Dean of Academic Affairs at MDC-Wolfson Campus. Dr. Vazquez-Hernández maintains an active research and academic agenda. He has published numerous articles and books on the Puerto Rican Diaspora in the US, chaired doctoral dissertations on the history of the Puerto Rican community in Miami and New York and continues to participate in many academic conferences as panelist and moderator.  He is currently completing a manuscript on the History of the Puerto Rican community in Florida.

Dr. Vazquez-Hernández also has a long history of community engagement among Puerto Ricans with National Congress for Puerto Rican Rights (1987-2012). He helped co-found the Eugenio María de Hostos Bilingual Community Charter School with Aspira of PA Inc, the first bilingual charter school in Pennsylvania. He also served as Chair of the Board of Directors of Aspira of Florida Inc. In 2021, he retired as a Full Professor from Miami Dade College and currently serves as a City Councilman in his hometown of Miami Springs, Florida.

Dr. Laura Kaplan worked as a union organizer and taught English as a Second Language at Hostos Community College before completing her doctorate in the Urban Education Program at the CUNY Graduate Center in September 2018. She is now Clinical Assistant Professor of TESOL and Bilingual Education at the Pace University School of Education, New York City. Her research centers on the Latino Civil Rights Movement in New York City, specifically the struggles for social justice and bilingual education in the South Bronx in the 1960s.

Her dissertation investigates how Evelina Antonetty and United Bronx Parents, through grassroots mobilization and community pressure, founded the first Spanish-English public bilingual elementary school in the entire Northeast. It further explores how pioneering Puerto Rican educators developed an additive model of bilingual education to serve the children of the South Bronx community. P.S. 25 produced an original program of multicultural and bilingual education that influenced future bilingual education programs in New York City and beyond.

Dr. Nydia Edgecombe, a Puerto Rican from Orocovis, worked at Hostos Community College of The City University of New York for 40 years, from 1977 to the Fall 2017. During her tenure at the College, she was promoted to various higher up positions, becoming the Director of Admissions and Recruitment in1986. In that capacity, she chaired the CUNY Council of Admissions Directors from 2000 to 2002 and in 2003 she was named the first chair for the CUNY Community College Enrollment Committee.

Nydia holds a bachelor’s degree in psychology from Lehman College and a Master in Science in Education from Baruch College. She holds a Ph.D. in history of Puerto Rico and the Caribbean from El Centro de Estudios Avanzados de Puerto Rico y El Caribe in old San Juan, Puerto Rico. Her doctoral thesis is based on the history of the Puerto Rican community of the South Bronx and the community activism of “The Hell Lady of the Bronx”, Evelina Antonetty,1968-1982.

Dr. Ana Celia Zentella (Hunter College/B.A., Penn State U/M.A., U of Pennsylvania/PhD) taught at Hunter College for 31 years; she was a founding member of the Department of Africana/African American and Puerto Rican/Latino Studies. Now Professor Emerita of Ethnic Studies at UC San Diego, she has also taught at UCLA and Swarthmore College. An “anthro-political” linguist, she studies Latinu varieties of Spanish and English, Spanglish, and language socialization in Latinu families, while challenging linguistic profiling, English-only laws, anti- bilingual education legislation, and damaging federal practices and policies.

Her book, Growing up Bilingual: Puerto Rican children in New York (Blackwell, 1997) won the Book Prize of the British Association of Applied Linguistics, and the Book Award of the Association of Latina and Latino Anthropologists of the American Anthropology Association. Spanish in New York:  Language Contact, Dialectal Leveling, and Structural Continuity (Oxford University Press, 2011, was co-authored with Ricardo Otheguy. Edited books include Building on Strength: Language and Literacy in Latino Families and Communities (Columbia TC Press, 2005), and two written with undergraduates: Multilingual San Diego: Portraits of Language Loss and Revitalization, 2008 (at UCSD), and Multilingual Philadelphia: Portraits of Language and Social Change, 2010 (at Swarthmore).

Dr. Hildamar Ortíz a civil rights activist in the late 1960’s, participated in the formation of student and grassroots organizations whose mission was to promote the aspirations of the Puerto Rican community organizations, like the Puerto Rican Student Organization (UNICA) at Lehman College, and the city-wide Puerto Rican Student Union (PRSU). In April 1969, Ms. Ortiz participated with the PRISA (Puerto Ricans Involved in Student Action) in the shutdown of City College which led to the resignation of the college president and resulted in the “Open Admission Policy”.

Ms. Ortiz, while student teaching in the South Bronx, was recruited by Evelina Lopez Antonetty to support parents who wanted community control of their schools in direct opposition to the United Federation of Teachers. Later, under a Ford Foundation Fellowship, Ms. Ortiz joined Dr. Frank Bonilla at Stanford University to work on the initial proposal of what would become the Centro de Estudios Puertorriquenos at CUNY. Often asked who influenced her in the quest for equality, Ms. Ortiz cites Evelina Lopez Antonetty, who created and led the United Bronx Parents. Antonetty taught Ms. Ortiz the value of grassroots organizing, building coalitions and networking. Ms. Ortiz has often relied on these sage words from Antonetty, “Yo se que tienes miedo, pero pa’lante!”

Juan González is the Richard D. Heffner Professor in Communications and Public Policy at Rutgers University, the co-host of the daily morning news show Democracy Now, and has been a well-known activist in the Latino community for more than fifty years. He was a staff columnist from 1987 to 2016 at New York’s Daily News, garnering numerous honors, including two George Polk awards for investigative series and commentary. He is a founding member and past president of the National Association of Hispanic Journalists, was the first Latino named to the Society of Professional Journalists’ New York Journalism Hall of Fame, and he has been elected a Fellow of the New York Academy of History.

González was one of the founders and leaders of the Young Lords in the late 1960s and was a founder and president of the National Congress for Puerto Rican Rights during the 1980s. His Harvest of Empire: A History of Latinos in America has been a required text on university campuses for more than 20 years and spawned an award-winning documentary film which he narrated. He has appeared in a dozen other documentary films, including the PBS series Latino Americans, Sundance Channel’s Dust to Dust, and Ric Burns’ Nueva York. Among his other publications are News for All the People: The Epic Story of Race and the American Media, and Fallout: The Environmental Consequences of the World Trade Center Collapse.

To sponsor the celebration, please visit:
https://hostos.thankyou4caring.org to make a donation.
Please write under comments that your contribution is for the E100 Centennial Celebration. Thank you!

Important: For the health and safety of our guests, some venues will ask upon entry to provide proof of covid19 vaccination or negative test results from an accredited lab. 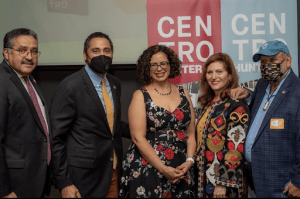 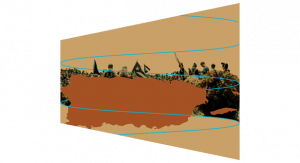 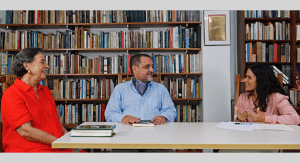 Join us on November 9th, 2021 @ 6 PM EST, as we host a special BORIMIX Afternoon Tertulia – Ricardo Alegri­a Revisited. Ricardo Alegria was a key figure in the … Continued