La Meriendita: Vicki and a Summer of Change!

A new in-person series in celebration of our 50th Anniversary! Join us once a month on Saturday afternoons at our Evelina Antonetty Reading Room in the CENTRO Library & Archives for La Meriendita, a story hour dedicated to children’s books. This month’s story hour book is Vicki and a Summer of Change! (¡Y un verano de cambio!) by Raquel M. Ortiz and Iris Morales, a story inspired by the actual events of East Harlem, New York in 1969 when the Young Lords Organization united with residents to make positive changes in their neighborhoods. The story follows Vicki and her older sister, Valencia, who live in East Harlem. Rotting garbage overwhelms the streets because city sanitation trucks rarely pick up the trash. Determined to make a change, the Young Lords start sweeping the streets. Neighbors with brooms eagerly jump in, and Vicki joins them. “You’re never too young to make a difference!” her sister says. Together they discover they can help change their community and the world. The beautifully illustrated English/Spanish book is for children 5 to 8 years old. It presents social justice themes in an accessible and age-appropriate way. Bring your little ones by for a story on their culture and snacks!

Iris Morales is a lifelong activist, educator, and author. Currently, she is a member of the Political Training Institute of Mijente, an organization for Latinx people seeking racial, economic, gender, and climate justice. Since the 1980s, Morales has created programs at the intersection of social justice and media as a tool for change and founded several organizations dedicated to youth media education. As founding director of Red Sugarcane Press, she publishes books about Black, Indigenous, and people of color in the Americas. She is the author of Through the Eyes of Rebel Women and the forthcoming Revisiting Herstories: The Young Lords Party, as well as the anthologist and editor of Voices from Puerto Rico: Post-Hurricane Maria and Latinas: Struggles & Protests in 21st Century USA.

Morales is coauthor with Dr. Raquel Ortiz of Vicki and A Summer of Change! ¡Vicki y un verano de cambio! This bilingual children’s book is inspired by actual events in East Harlem in 1969 when residents and members of the Young Lords Organization united to make positive community changes. At the heart of the story is the message: “You’re never too young to make a difference!”

During the 1960s and 1970s, Morales was a leading member of the New York Young Lords. She documents this experience in ¡Palante, Siempre Palante! that was broadcast on public television in 1996 and continues to be screened in venues across the United States and Puerto Rico.

Morales holds a JD from NYU Law School and an MFA in Integrated Media Arts from Hunter College. 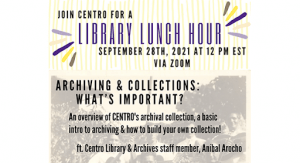 Crack open your lunch box and settle in for our first installment of our Library Lunch Hour put on by CENTRO’s Library & Archives department on September 28th, 2021 at … Continued 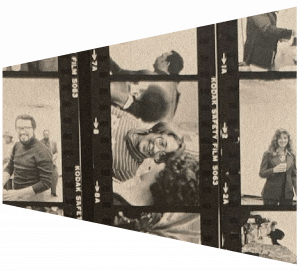 Join us on Tuesday, February 8th at 12 PM EST for the first Library Lunch Hour of the Year! We will be joined with documentary filmmaker and President of Balestra … Continued 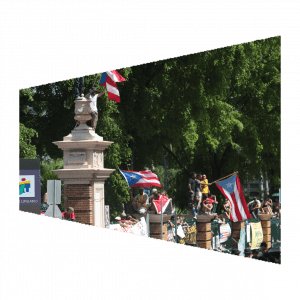 Join us this Wednesday, October 17th at 3 PM EST for Accion UPR! A community discussion and call to action for defending public education in Puerto Rico! Be a part … Continued