Puerto Ricans, The Communist Party and the Hispanic Popular Front, 1929-1948

The intersection of the Communist Party with New York’s Puerto Rican and larger Hispanic communities produced a network of Spanish speaking lodges and clubs affiliated with the Communist Party's International Workers Order. Led by Jesus Colon, Consuelo Marcial, Jose and Emilia Giboyeaux and many others from the Party’s Hispanic Section, and joined by many progressively-minded community leaders, the Hispanic lodges of the IWO built a magnificent movement that formed the core of what I call the Hispanic Popular Front. The IWO was established in 1930 by the Communist Party as insurance and fraternal organization that would help workers survive the Depression and develop a culture of working class solidarity. Their goal was to agglomerate the many community and solidarity oriented mutual aid societies of the immigrant and ethnic communities at a time of despearate economic insecurity and lack of health, unemployment or death benefits.[8]

By 1937 the Hispanic Popular Front, with the IWO lodges at its center, was growing quickly. The Communist Party’s Spanish Section had grown and established itself as the most active and dynamic political organization in the Spanish-speaking neighborhoods, in competition (and sometimes collaboration) with the small Hispanic Socialist, Democratic, Republican and eventually Liberal Party clubs. The IWO lodges and clubs were expanding both in number and size. Independent socialists, radicals and progressives agglomerated in these clubs around support for Roosevelt’s New Deal and Good Neighbor policies, the emerging industrial labor movement and support for the global anti-fascist struggle. But no other single issue besides conditions in Puerto Rico mobilized more Puerto Rican and pan-Latino support than the defense of the Spanish Republic during the Spanish Civil war (1936-1939). Support for the Republic became a common part of progressive and leftist mobilization. The fight against fascism in Spain presented two important elements that connected Puerto Ricans, Cubans and Spaniards in New York: the Popular Front encouraged the defense of a vision of progressive Hispanism that had deep cultural roots among Puerto Rican activists and leaders who had sought to use language, and a larger Hispanic ethnic identity as one basis for establishing solidarity and support for progressive labor politics among Latinos in New York.

Popular Front leaders and organizations, with various levels of proximity to the Communist Party, also produced a vibrant leftist press between the early 1930s and the mid-1940s. Different iterations of Communist Party-supported newspapers, from Vida Obrera through Pueblos Hispanos, Liberacion and La Voz gave voices to the political and cultural (and even commercial) interests of the Spanish speaking, left-leaning community. Commercial newspapers like El Diario and La Prensa were also pushed to cover the labor and left news emerging from the Latino communities in these years. 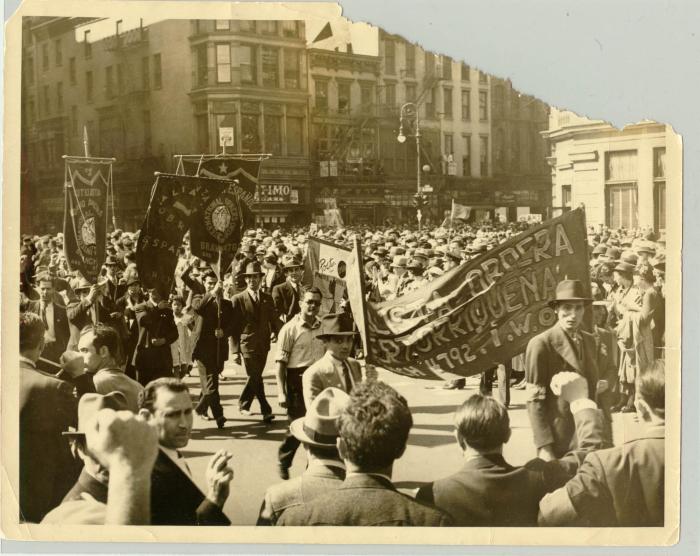 Another important component of Popular Front politics among Latinos was the American Labor Party. The ALP was created in 1936 to mobilize leftist support for the New Deal and to elect left-leaning candidates to local elections (and against Tammany Hall interests) at a time when the popularity of the Communist Party was growing markedly and the Socialist Party was in crisis.[6] It was a product of New York’s politicized unions, and only in New York did the ALP become a significant force for votes and protest mobilizations. Initially supported by the Socialist Party, the Communist Party and the International Ladies Garment Workers Union (ILGWU) leadership, the ALP came more fully into the orbit of the Communist Party in 1944. The ALP was able to mobilize significant levels of support, despite the exit of the Social Democrats, and others that had grown disaffected with the steamroller style of the Communist Party. It served as the basis for Vito Marcantonio, leftist congressman from East Harlem electoral successes. Vito Marcantonio represented East Harlem in Congress and was singularly dedicated to his Italian and Puerto Rican working-class and poor constituents.[7] He was a supporter of Puerto Rican independence and defended Albizu Campos, the Nationalist Party and the Partido Independentista. The ALP also helped elect the first Puerto Rican to govern as part of the New York State Assembly. The ALP fielded many Puerto Rican candidates and mobilized people for hundreds of protests and other efforts from the late 1930s through the early 1950s.

Despite auspicious beginnings as part of the pro-Henry Wallace campaign of 1948 (which received participation from the Hispanic Popular Front activists including Bernardo Vega and Jesus Colon), after that year the Hispanic Popular Front declined like much of the leftist culture and organizing in New York. The victim of red-baiting, red-scare and cold war politics, it also suffered from the limitations of the Communist Party’s strange combination of liberalism and Stalinism and its inability to create a political movement that was independent from mainstream parties. The IWO was seized by the New York State Attorney and most of the clubs and lodges closed as members withdrew in fear. For Puerto Ricans the risk of associating with the left was now doubly dangerous, as state agencies policed leftists at the local and national levels, and the repercussion of the Korean War (which began in 1950 with tens of thousands of Puerto Rican troops) and the 1950 Nationalist attack on Truman’s Blair House. Stalin’s crimes, his contradictory and often treacherous role in the Spanish Civil War, and the reality of the murderous counterrevolution that he had led in the Soviet Union was not important, as they were not well known to most Puerto Ricans or broadly to most supporters of the left. The anti-communist hysteria of the 1947-1960 years was the most important reason for Puerto Ricans to distance themselves from leftist politics. Puerto Rican leaders were questioned about association with “Communist” entities by congressional investigations and the FBI, and labor leaders subjected to the scrutiny of anti-leftist purges and even legal requirements. The Communist Party itself nearly ceased to exist, and many of its members were driven into hiding. The ALP, by then controlled entirely by the Communist Party for electoral purposes, ceased to exist in 1956.

Continue to Bad Press, Good Press and the Reception
Of Puerto Ricans in New York City, 1946-1948

Editor's Note: This article is adapted from the original version published in the Summer...
Sponsored Migration: The State and Puerto Rican Postwar Migration to the US