I belong to a group called Doctors for Puerto Rico.

We have been dispatching medicine and small teams of medical staff to the island, in coordination with local health authorities since two-and-a-half weeks after Hurricane Maria. When we started, we weren’t sure what kind of assistance would do the most good amid a situation threatening to become a humanitarian disaster.

Two of us went there to find out.

To get started, I traveled to Puerto Rico in early October with Dr. Elimarys Perez-Colon, a colleague at the University of South Florida, where I work as a primary care physician and teach doctors in training.

When we landed in San Juan, everything at the airport seemed eerily normal. The lights were working. The bathrooms were clean and had running water. The shops were open and blasting bachata music.

We stopped at one to buy a 4-foot-long Puerto Rican flag, having no trouble paying with a credit card. 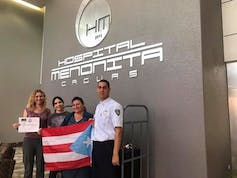 The author, shown here with Elimarys Perez Colon and pharmacy staff from Hospital Menonita, holding a Puerto Rican flag that represents a commitment to support the hospital in Caguas. Asa Oxner Myers

But once we left the Southwest Airlines terminal, we passed under a leaking roof and the entrance to other terminals that were closed, dark and empty. This experience sums up what’s going on there in general. Puerto Ricans’ spirits are showing through as they try hard to return to normal, but this is possible only in small pockets so far.

Driving around San Juan was a lot like being at the airport. Some areas were running on generators and had strong 4G mobile phone signals. Other areas were abandoned, with significantly damaged buildings and downed power lines. Outside the city, trees were barren and rivers engorged.

Our phones stopped working about 10 miles outside the city. They never worked anywhere else as we spent several days visiting hospitals, clinics and shelters across the central mountainous regions of Caguas, Villalba and Juana Diaz.

We slept in the homes of my colleague’s relatives, moving around for the most basic reasons. We would shower in her aunt’s house because they had water, then leave when the water stopped running. 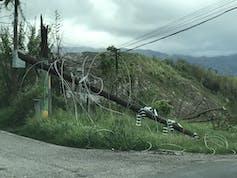 Downed power lines like this one are a common sight throughout Puerto Rico weeks after Hurricane Maria. Asa O. Myers, CC BY-SA

In general, aid experts recommend that people who want to help with disaster recovery make monetary donations rather than ship clothing, food or other goods.

But in Puerto Rico’s case, my aid group has determined that there is also a clear need for universities, hospitals and other centers of expertise to help. Relief efforts underway – including the assistance by the Federal Emergency Management Agency and the Red Cross – are not meeting the island’s needs for technical personnel.

Based on what we learned and how we are lending a hand, here are some suggestions for people who either want to send aid to Puerto Rico or go there themselves:

1. Realize that you can make a difference.

When we got to remote areas of Puerto Rico, we were glad we ignored excuses like “it’s an island” or “they were in bad shape before the hurricane.”

The medical director of Hospital Menonita, a 400-bed referral hospital in the town of Caguas, told us that we were the first group to bring supplies and aid to their hospital. We were shocked to learn this, as we arrived 17 days after Hurricane Maria.

My aid group is sending this hospital asthma drugs, intravenous antibiotics and other supplies, based on its own updated inventory information. As of early November, everything we’ve sent has made it there – 4,000 pounds in total.

We are also sending prescription drugs to smaller hospitals in the towns of Villalba and Juana Diaz. Grants from the Hope and Health Foundation, Tampa General Hospital, University of South Florida and several private foundations around Tampa Bay have provided the roughly US$100,000 in funds and medical supplies for this project. Jabil, a medical supply company, is providing logistical support like flights and shipping.

Yes, we have to ship these supplies on plane or cargo barge instead of driving the stuff there. But our effort shows that it can be done. 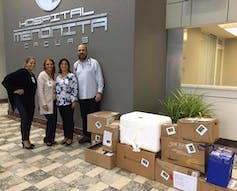 Staff at Hospital Menonita in Caguas, with 700 pounds of prescription drugs and other medications shipped as part of this ongoing relief effort. Elimarys Perez-Colon, CC BY-SA

2. Work with the locals

We initially thought that we could help the most by sending dozens of doctors and nurses to pitch in.

But we encountered highly qualified medical staff in every hospital and clinic we visited. When we realized that the pharmacists could easily give us an inventory of the most depleted medications or supplies, we changed our plans. 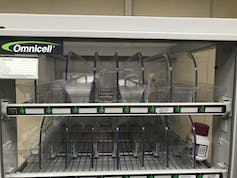 That made us shelve our plans to offer medical students an opportunity to temporarily transfer to our medical school.

We asked local medical officials from the Puerto Rican Department of Health how we could help.

Were there any underserved areas where visiting medical professionals could fill gaps? Would it help if we checked on the spread of infectious diseases?

We also offered to send doctors from our team in Florida to relieve some Puerto Rican doctors who had been working nonstop.

Then we met with staff from the Villalba mayor’s office and police force. They reviewed paper records for every house in the district of 25,000 people, looking for children, elderly and sick people and those with disabilities.

We left their office with a detailed medical wish list. The list included formula for newborns, nebulizer machines for asthmatics and insulin for diabetics. There were also requests for visiting doctors to examine bed-bound patients.

Together with the command center’s nurse, we drove around the mountainside town to complete this list, taking the time to do medical exams in shelters and homes as we made our rounds. 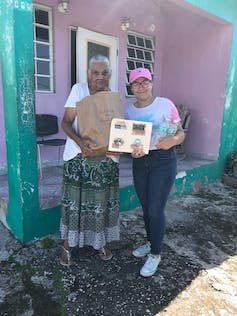 A vulnerable patient receiving a medical visit in her home and some clean water and supplies. Elimarys Perez Colon

We were mindful that everyone who travels to Puerto Rico these days is adding to strains on the limited supplies of water, food and energy. Even before Hurricane Maria, the majority of the island’s food came from the U.S. mainland or was imported.

That is why only two of us went on the initial assessment. It is also the rationale we are following as we focus on sending targeted medical supplies and small, mobile teams from Florida who join with the local medical staff to extend their reach into rural areas.

We believe that people who plan to visit their relatives in Puerto Rico or travel there to provide aid of any kind should plan their trips ahead of time and have an extremely clear purpose for this travel. They can also take a few common-sense precautions to ensure they are truly helping out.

For example, they can secure lodging in advance, perhaps in the homes of the locals. It’s best not to depend on hotels right now because many of them are housing Puerto Ricans who lost their homes.

Because clean water is in short supply and grocery stores are rationing it, it’s important for visitors to bring their own water filters and some bottled water as well. This will ensure that they don’t hog bottled water at their hosts’ homes.

Finally, it’s important to book your return flight before you go.

Otherwise, you could wind up stuck there for weeks due to the exodus of locals who are leaving for short-term stints or rebuilding their lives on the mainland.

Doctors for Puerto Rico plans to continue to work with the Puerto Rican Department of Health to recover the health sector for at least another six months. We are staying in Florida but responding to requests for help from the island’s vulnerable patients and health care providers.

This article was originally published on The Conversation. Read the original article.

© The Conversation. Published by permission in Centro Voices 07 November 2017.

About the author Dr. Harry Franqui-Rivera is an Associate Professor of History at...
Hidden Gems at The Archives: Dr. Helen Rodriguez-Trias

In 2019, First Lady Chirlane McCray, along with Deputy Mayor Alicia Glen and the...
Dora Collazo Levy, A Loisaida Icon Remembered

Editor’s Note: This past Memorial weekend, the 2019 Loisaida Festival took place. The...